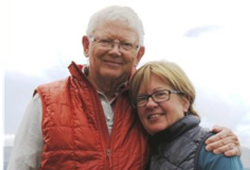 Charles, a Legacy Society member who, along with his wife Diane, has made two planned gifts to PBS NC, recalls that he never actually saw a television set until he went to college at age seventeen. Growing up in rural Colorado, the terrain prevented many of the state's residents from receiving network television.

Charles went on to become an expert on the medical legacy of the atomic bomb and has spent his adult life studying the effects of radiation on humans and animals. He spent thirty years the faculty of the University of Colorado School of Medicine (Denver) and its affiliated Eleanor Roosevelt Institute for Cancer Research. He also spent thirteen years as Professor of Radiological Health Sciences at the Colorado State University School of Veterinary Medicine in Fort Collins.

Diane hails from New Jersey, attended Oberlin College, and served on staff in Denver and Fort Collins. She has co-authored several research papers on the genetics of human disease and the effects of radiation on humans and animals. She worked with Charles as a research associate and together they moved to Japan where Charles served as vice chairman and chief of research of the Radiation Effects Research Foundation, headquartered on a quiet hill within walking distance of Hiroshima's ground zero.

With three grown children and eight grandchildren living around the country, the couple weighed their options regarding a place to retire. They settled on North Carolina, citing the climate, ease of access to the rest of the country, and the availability of health care, education, and cultural assets—including the availability of public television.

Charles notes that in the early days of television you felt you could trust what you were watching, particularly the news. Now, Charles and Diane look to PBS NC almost exclusively to provide information and perspective on local and national events and issues. "We really don't watch any other news channel." Other program favorites include Antiques Roadshow, Downton Abbey and other Sunday evening British dramas, Great Performances, and PBS NC's original productions for and about North Carolina.

Diane describes her belief in the value of public television programming this way: "There seems to be a loss of community in the world today, a loss of shared experiences. It is important that we stay together, and the tone and clarity of communication provided by PBS and PBS NC helps us stay connected."

Practically speaking, Charles adds that "unless viewers of PBS NC support the station, it will vanish. There is an urgency to this issue."